In the late 1800s to mid-1900s, the citrus industry in Southern California drove much of the area’s economic and cultural development. To complement the extensive research historians have conducted on the citrus industry, these pages capture the life of a citrus grower by highlighting a few notable citrus pioneers and the different components of managing a citrus grove, including working with immigrant laborers, distributing and marketing the oranges to consumers across the United States, and collaborating with other grove owners.

Nutritious soil, available water from local mountains, and a climate of “abundant sunshine and cool winter nights” made Southern California an opportune place to grow citrus trees.[1] In 1840, William Wolfskill, a former fur-trapper, marked the birth of California’s citrus industry when he planted hundreds of citrus seedlings on two acres of land that later became downtown Los Angeles.[2] While the citrus industry grew steadily in the mid-1800s, the orange industry blossomed in 1877. Around this time, ﻿Eliza and Luther Tibbets﻿ introduced delicious, seedless Washington D.C. navel oranges to California. Eliza hosted a housewarming party and shared the ripe fruit--neighboring citrus growers immediately saw the potential for this variety and paid $5 per bud in order to start producing Washington navels on their orchards. [3]

Farmers would often experiment with different varieties of oranges from all over the world in order to produce the most delicious oranges. However, the navel orange, specifically the Washington Navel, became the most popular in the winter. In the summer, the Valencia orange become popular on most orange orchards. These two orange varieties meant the citrus growers could have a year-round production and profitability.


The recently constructed transcontinental railroad allowed citrus pioneers to ship their produce eastward and offer fresh oranges at an affordable price to a national market.[2] American consumers across the United States could not get enough of this Californian export and fueled the exponential demand for oranges. Between 1880 and 1893, “California’s acreage devoted to navel orange production exploded from three thousand to more than forty thousand acres.”[4] The popularity of navel oranges launched a positive feedback loop that spurred investment into the industry and drew in more citrus pioneers to the area. For instance, many wealthy pioneers, including the Chaffey brothers, funded many large-scale irrigation projects throughout Southern California to ensure the availability of water for the citrus groves.[5]

Ambitious Americans and immigrants migrated west in hopes of profiting from the industry’s growth. Before the boom of the citrus industry, Native Americans and mestizos worked on groves and helped construct early water infrastructure projects.[6] Chinese immigrants replaced Native Americans and mestizos in the late 1800s, making up 80 percent of the labor force in the citrus industry by 1885.[6] According to citrus growers, Chinese workers had “considerable horticultural skills and knowledge [that] made citriculture enormously successful.”[6] Due to the Chinese Exclusion Act and racial discrimination against Chinese immigrants, Japanese immigrants made up a majority of the labor force between 1900 and 1920. Mexicans dominated the industry later in the 20th century.[6] Women worked in packing houses, while men worked on the fields.[7] The waves of different immigrant workers in the citrus industry reflect a larger reality of the nation’s history and America’s interaction with different races in its struggle to define its national identity.

Grove owners suffered from poorly designed and unreliable distribution channels; nobody could guarantee the sale of produce once the oranges leave the orchard.[8] As the local citrus industry in the greater Claremont community and the foothill communities from Los Angeles to Riverside grew, growers felt compelled to associate in order to ensure profitability from their produce.[9] Citrus growers in Claremont “established one of the earliest citrus cooperatives for marketing and shipping citrus fruit, a model that led to the organization of the Sunkist cooperative.”[10] In 1893, independent growers formed the Southern California Fruit Exchange, now known as Sunkist Growers, in order to benefit from economies of scale in packaging, shipping, and marketing costs, and to maximize profitability.[7] Citrus packing houses served as a crux for citrus growers. The crates of oranges and their colorful, eye-catching labels became an icon of the industry’s development. While the Southern California Fruit Exchange towered in size compared to the other exchanges, most citrus growers joined an exchange to more efficiently distribute their produce and maximize profitability.[3] Beyond collaboration through exchanges, farmers often shared industry knowledge and best practices through regular conferences and written publications. In 1895, the Los Angeles Daily Times reported that the citrus industry yielded growers about $3,000 or about $60 per family in the seven southern counties.[10] The California citrus industry was a $200 million industry by 1915. San Bernardino County shipped out more than 125,000 carloads of citrus fruits annually. [3] The contributions of citrus pioneers, the critical development of transportation and water infrastructure, and the effective institutionalization of citrus distribution attributed to the success of the citrus industry.

Due to the dynamism of the citrus industry and the constant learning throughout the citrus grower community, life as a citrus farmer may seem fairly romantic. However, citrus growers faced many weather-related challenges. Specifically, a record killing freeze in 1913, called the “Big Freeze,” that caused “immense losses to growers” and “[spread panic] throughout the citrus industry.”[11] The economic losses caused by the freeze urged the California Fruit Growers Exchange to lobby state congress for more funding in research and development for the citrus industry through citrus experiment stations.[11] Citrus growers overcame the challenge of handling cold weather by developing frost control and frost protection best practices (see additional resources for bulletin on frost control).

The citrus industry served as a crux for Southern California for more than five decades. By 1920, the citrus industry employed “roughly one-third of the local workforce.”[12] An analysis of various citrus grower responsibilities demonstrates the dynamism of the industry and how the history of the Southern Californian citrus industry captures many different aspects of American History at large, including issues of immigration, western migration, the transcontinental railroad, and rapid economic development that launched America into an age of consumerism in the 1920s. 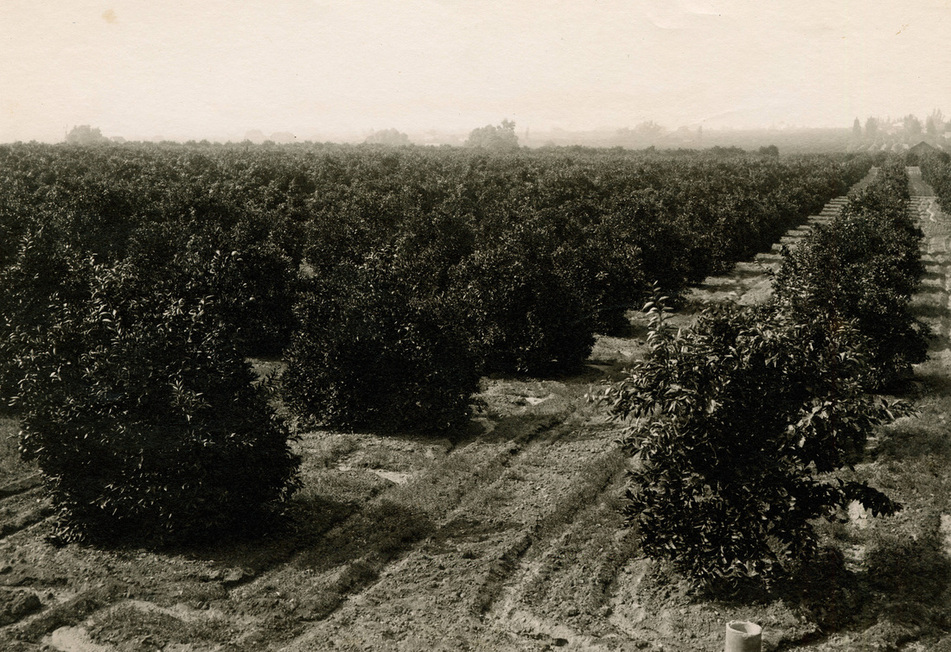 An analysis of the citrus industry in Southern California, especially through the lens of a citrus pioneer, captures many parallels between the rise of the industry and prominent themes in American history, including western expansion in the late 1800s, progressivism in the early 20th century, and the development of American consumerism.

Most citrus pioneers did not receive an education in horticulture. Enticed by the Western Frontier, these pioneers migrated west to fulfill their longing for individualism, wealth, and freedom in California. Not only did the transcontinental railroads launch the United States into an age of industrialization and economic development, they also played a critical role in the success of the citrus industry and allowed farmers to supply their produce to a national market.

Dynamics within the citrus industry also capture progressive ideals. Specifically, the citrus growers’ focus on rational and logical processes reflected progressive ideology and supported the industry’s success. Farmers took a very scientific approach to breeding oranges in order to develop the sweetest, most delicious fruit. Grove owners collaborated in cooperatives and exchanges in order to generate economics of scales and to maximize profitability. Furthermore, grove owners thoroughly observed and analyzed the distribution process in order to optimize efficiency. Fruit packers, often women, filled orange crates in an organized manner and stacked the crates neatly into shipment freights, so consumers could receive the freshest oranges in the fastest manner possible. Besides the scientific approach to the citrus industry, other progressive ideals include the emphasis on social equality. Citrus packing houses employed mostly women in the local community, offering women an opportunity to be economically independent.

Not only did the citrus industry play a role in American consumerism, the exponential increase in orange consumption through the 20th century has come to define part of American identity. Orange juice commercials often depicted a nuclear family eating breakfast together. Exchanges strategically marketed drinking orange juice and eating oranges for breakfast as the healthy, American way of life. In other words, consuming oranges served as a symbol of what it means to be American and a wholesome American family.

The history of people involved in the business of citrus ranching also affords glimpses of immigration reforms and interactions between ethnic groups in the early twentieth century. The specific groups who worked at picking and packing the oranges often worked for lower wages than many white Americans at the time. These same groups repeatedly demonstrated extreme ambition and the willingness to face adversity by leaving work at the groves to start their own farms. Sometimes, the grove owners helped the field laborers purchase land. Even international politics occasionally came into play: the Japanese bought exclusively from certain packing houses up until the polarizing, divisive events of World War II.

The citrus growers showcased perseverance and dedication. They have fascinating life stories, and through these stories come an understanding of the rancher’s version of the American Dream. Many moved west looking for healthier and happier lives. They found those lives in the beautiful California sun at the base of the San Gabriel Mountains and in the valleys surrounding Los Angeles. They worked hard, maintaining groves, securing water rights, and building homes for their families. They even worked together to form exchanges which raised the industry to prominence and influenced the entire country.

As the industry moved into the modern era, citrus pioneers and grove owners, including those in Claremont, gradually sold off their groves. The groves, originally purchased for a few hundred dollars an acre, sold for high sums as Los Angeles began its sprawl. Cities paved over the groves to make way for suburban homes. However, the legacy of the groves persists in Claremont through the lemon packing house, the lines of orange trees that adorn the pathways of Scripps College, and the seal of Pitzer College--an orange tree.

A passionate group of Americans who worked together to build something amazing: the Southern California citrus industry. To them, they did not intend to be extraordinary, they were just being themselves. In the words of Edward L. Dreher: “I was a rancher and that was my business.” [14]
Additional Resources

2.    Oral History of the Citrus Industry: The Claremont Graduate University conducted a series of oral history interviews with notable growers in the local citrus industry. These transcripts cost money to acquire, but they can paint a firsthand picture of life as a citrus grower in Claremont.

4.    History of the College Heights Lemon Packing House: If you have already been visited the Packing House, learn more about its history!

6.    Frost Control for Horticulture, Bulletin No. 41, The Conveyor Company, Inc., McPherson Collection, Box 22, Folder 50.: Find this primary source at Honnold Mudd Special Collections if you are curious in learning more about the types of information and best practices growers shared with one another.

8. How America Fell Out of Love with Orange Juice: Despite the popularity of orange products during in the 20th century, orange juice consumption has fallen in the early 21st century.

Note: Footnotes in nontraditional format for easier reading and to reduce repetition of citations.
By Alice Chang and Anne Christy for HIST81, Claremont McKenna College
November 2014