Citrus Growers:
Their Lives and Connections with the Community

Who Were the Citrus Growers?
﻿The beautiful Mediterranean climate of Southern California drew many settlers in the late 1800s. Some came to experience the healthy atmosphere. Others were looking to make a better life for themselves and their families. As the industry grew, some ranchers led the others in the formation of cooperative exchanges which helped the community of growers, pickers, and packing house workers to prosper. Early citrus growers did not receive an agricultural education. Instead, most saw the imminent growth in the citrus industry and wanted to financially profit from it. These early growers aggressively experimented with “irrigating, planting, pruning, harvesting, and managing their crops. They eagerly exchanged information at the numerous fruit and citrus fairs throughout the region and flooded the College of Agriculture at the University of California, Berkeley, with letters requesting information.”[1]

In the 1960's researchers in an Oral History Program at Claremont Graduate University interviewed several prominent citrus ranchers from the Claremont area. The transcripts of these interviews help to paint a picture of the life of a citrus rancher at the turn of the century.﻿
George and William Chaffey
In 1880, George and William Chaffey, Canadian-born brothers that came to Riverside to profit off of the booming real estate market, bought 6,000 acres of land with $60,000 that would become Ontario and Upland, California.[2] In order to develop a strong agricultural community in this new property, the Chaffey brothers invested in an irrigation system that delivers water to each parcel of land via underground cement pipes.

The mile-long piping cost about $75,000 to construct over five years. Many Chinese immigrants worked on this irrigation system.[3] The irrigation system provided plentiful water to the agricultural settlers in Ontario. George Chaffrey also used the irrigation system to generate electricity for the community.[3] The success of both the irrigation and electrical infrastructure made Ontario an attractive place to settle and start your own agricultural farm.
Russell K. Pitzer, another citrus grower in the area, recalled the character and convictions of Dreher in an interview:

I knew him very well. He was a fine old man. He was a fine-looking older gentleman with his beard. He was very aggressive and positive in his convictions and statements. He rather wanted to boss or dominate whomever he was associated with, but in a nice way. There was no serious objection that I ever knew of. He organized the San Antonio Fruit Exchange and represented this district on the then Southern California Fruit Exchange, later the Sunkist organization. He was very effective and a good representative, I thought. [5]

Edward Dreher joined his father in the business of citrus growing. The two helped develop and grow the exchanges. In 1906, Edward bought the Dreher citrus frove from his father and started the College Heights Orange Association three years later. [4] Both also remained affiliated with the The Claremont California Fruit Growers' Association, which grew and merged with other cooperatives, eventually becoming the well-known exchange, Sunkist Growers' Incorporated.
Russell K. Pitzer
Many consider the Pitzer family one of the most influential citrus ranching families in the Claremont area. Russell's father, Lee Pitzer moved the family West in an effort to alleviate the symptoms of his son Grant's asthma. [6] When they first moved to California, Lee Pitzer started a cannery where Russell worked as a young man. After graduating from Pomona College, Russell went to Law school, and served as the City Attorney of Claremont.

However, he soon discovered more wealth in the citrus industry than in law, and owned one of the largest citrus groves in the area, covering approximately 700 or 800 acres.

Pitzer became quite involved in the growth of the community. He served as a director for the Old Pomona Valley Telephone and Telegraph Union, the Secretary for the Claremont Board of Trade, and a representative of the San Antonio District on the Sunkist board for five years, a position he held for ten more years in the 1940s.[8]

Despite his success at citrus ranching, Russell K. Pitzer most foundly remembers his role in the development of the Claremont Colleges. He worked with Dr. Blaisdell, Donald McKenna, and Dr. Robert Bernard, among others, to found Claremont Men's College. Pitzer became interested in the venture because he sympathized with the difficulty of returning to college as a GI post-World War II. Later, he assisted in the creation of Harvey Mudd College and in the founding of Pitzer College, originally a women's college. [5]
Lee Pitzer and Clifford B. Pitzer
Clifford B. Pitzer, a nephew of Russell K. Pitzer, was born in Pomona in 1904. He attended Claremont High School and graduated from Pomona College with the class of 1926. As a young man, he worked for a short time in Ontario for the Union Oil Company before buying land and growing citrus trees.

His memories of growing up on a citrus ranch in Claremont paint an idyllic picture. As a boy, he worked in the groves until ten or eleven in the morning; "We were pretty young, but we would shovel what we called checks—you made furrows for the irrigation water and made an extra cut in close to the tree with a shovel." [6] Then, he and his friends would go swimming in the nearby irrigation reservoirs during the afternoons. He also enjoyed hiking along the mountain trails, and riding his motorcycle through the hills above the ranches.

In 1903, it was commonly thought that the citrus groves would not do as well in the rocky soil near the mountains as in the smooth soil of the lowland areas. However, it turned out that the rocks provided wonderful drainage, and, with proper care, the groves prospered. However, the weather did not always cooperate with the citrus growers. In 1913, an unusually cold winter froze the orchards. That was before many of the ranches had heaters. Clifford's father, Lee Pitzer, paid him twenty-five cents a tree to pull down the frozen fruit.

Technological advances also benefited the lives of the growers, who worked with animals in the fields to harvest and deliver their oranges and lemons. Lee recalled the first time he used a truck to haul oranges out of the groves:

In 1917 I purchased the first truck to haul fruit from the grove. I was hauling fruit with six mules, two teams on the road and one on the grove to double up to get the fruit out of the grove. In those days deep cultivation was the only way to produce fruit. You pruned the roots and never let a tree have a root within a  foot of the surface. Thanks to the rocks, that theory had to be abandoned. An agent for a little two cylinder truck drove up when I was hauling fruit stuck in this deep cultivation with a hundred boxes of fruit. He said that he could haul more fruit in a day with his truck than I could haul with six mules and he would like to prove it. I told him that if he could, I would give him four mules and a thousand dollars for his truck. He went to his garage and put in some low gears and was back the next day and hauled two hundred boxes more than I had been able to haul. I got the truck and he got the mules. [6] 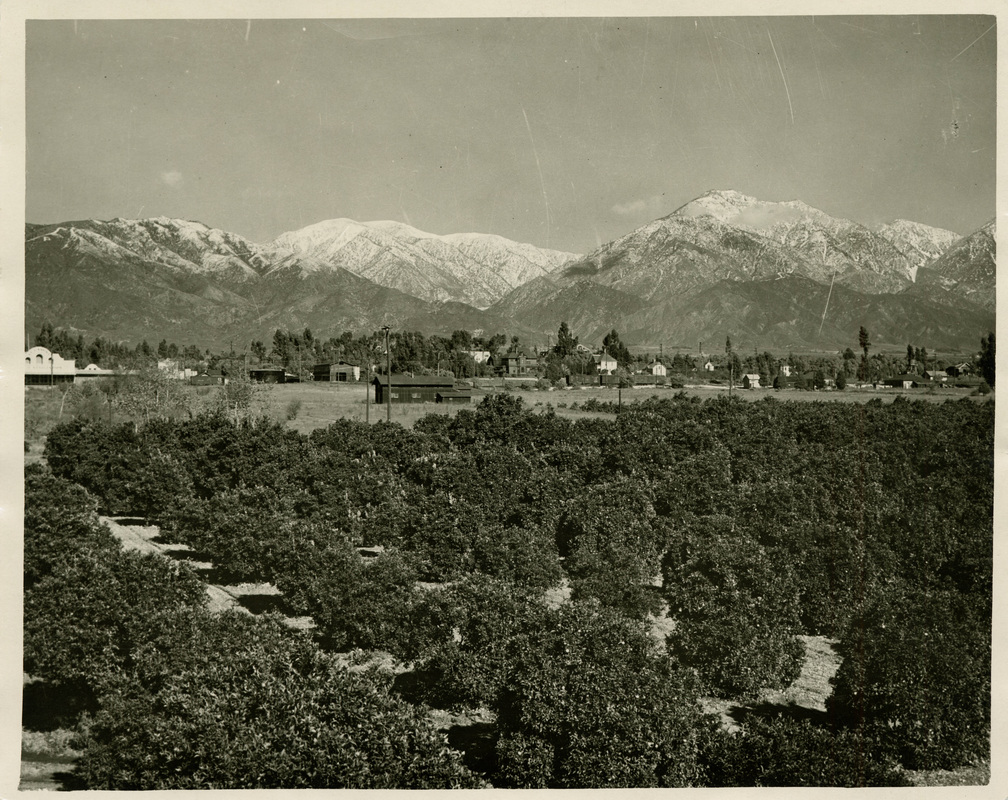 Figure 3. A view of Claremont from the south. This photograph was taken around the year 1909. One corner of a citrus grove is visible in the foreground, and the snow-covered peak of Mount San Antonio (Mt. Baldy) can be seen in the background. The space in the middle contained rancher's homes, the town of Claremont, and more orange and lemon groves. This is the environment that the Claremont Citrus growers, like The Drehers and the Pitzers, lived in. [8]﻿
FOOTNOTES
[1] Galvin Preservation Associates, Historic Context for the City of Ontario’s Citrus Industry, February 2007, pg. 10.
[2] Galvin Preservation Associates, pg. 4.
[3] Galvin Preservation Associates, pg. 5-6.
[4] Edward L. Dreher (Citrus Rancher), interview by Caroline Beatty and Spencer Olin, 1963.
[6] Russell K. Pitzer (Citrus Rancher-Philanthropist), interview by Enid Douglass and Caroline Beatty, 1965.
[6] Clifford B. Pitzer (Claremont Citrus Rancher), interview by Enid H. Douglass and Caroline Beatty, 1964.
[7] "Wheeler Scrapbook 2, Page 112." Wheeler Scrapbook Collection. Honnold Mudd Library, Special Collections. http://ccdl.libraries.claremont.edu/cdm/compoundobject/collection/wsc/id/429/rec/5
[8] "Claremont from the south." City of Claremont History Collection. Honnold Mudd Library, Special Collections. http://ccdl.libraries.claremont.edu/cdm/singleitem/collection/chc/id/70/rec/18